Last week I attended the MN state quilt show.  It was held at the River Center in St. Paul.  The city was crazy!  There were concerts, bike races and dance competitions all running at the same time as the quilt show. I was only interested in the quilts.
The Minnesota Quilt Project (MQP) had a display of Civil War-Era Quilts.  I want to share a few of them with you (with permission of course from MQP).  The following words are not my own.  They are captions written by MQP. 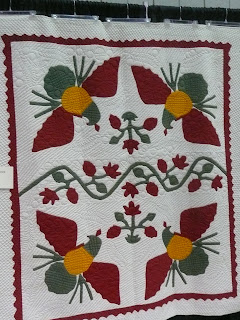 Eagle Four-block
"The eagle pattern was popular after the Revolutionary War as Congress designated the bald eagle as the emblem of the United States of America in 1782.  Eagle Quilt patterns became popular again at the time of the Civil War as the eagle symbolized unity between the states.  Lent by James and Sylvia Aufderheide.  (Ohio 1868)" 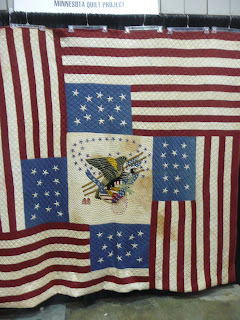 Old Glory Quilt
"Patriotic quilts often appear during times of world conflict.   The 33 stars in the field around the eagle’s head strongly suggest this quilt was made between 1859 and 1861, immediately before or during the Civil War.  The 33rd star was added to the American flag July 5, 1859 following Oregon’s admission to the Union on February 14, 1859.  Even after the South seceded from the Union, President Lincoln would not allow stars to be removed from the flag.  The American flag contained 33 stars for only two years until Kansas became a state.  Lent by Bill and Marti Wivell." 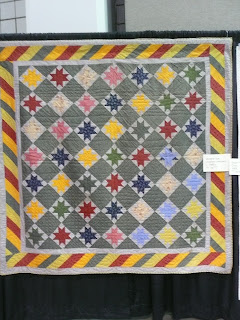 Variable Star
"This quilt was made around 1860-1865, the time period when the cheddar orange dye first appeared.  Other colors typical of the period included Turkey red, indigo blue, Prussian blue, green, yellow and pink.  Lent by Pat Cox." 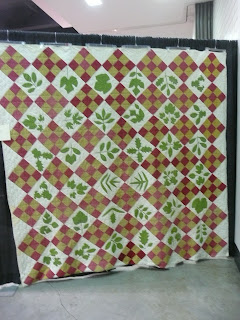 Nine patch and leaves
"Dated 1862.  Made by a member of the Brener family, emigrants from Prussia.  They settled in the Lebanon, PA area in the 1840s.  Lent by Gail Bakkom."

I love that big eagles quilt!

Always enjoy seeing antique quilts from other parts of the country. Cyndi in New England

These antique quilts were great to see - what an unusual variation on the four block eagle quilt.

Thanks Annemarie. The show was so busy we hardly had a chance to look at the quilts.

I never tire of viewing quilts celebrating America. Thank you for making it possible to enjoy these. Also enjoyed viewing your Jo projects I just completed Amy's Choice and next we are doing Bird's View..Congratulations on your quilt in Quilt Mania. This is my new favorite quilt magazine.